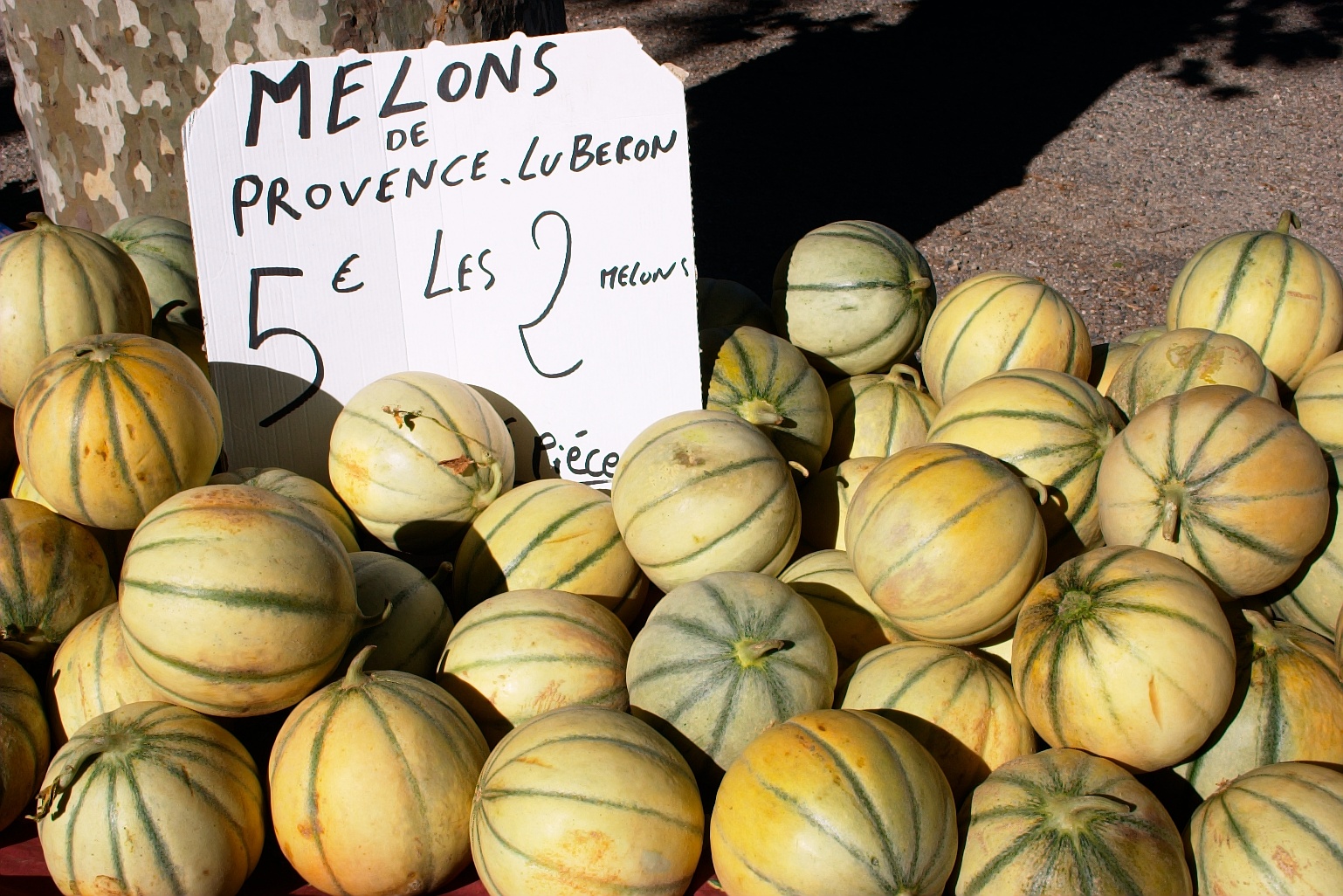 Food shopping in France is a pleasure. First and foremost, one has ”the market” in most villages (and cities). It's not just food, but also everything from clothing, fabrics, kitchen utensils, mattresses, furniture etc. Below is an overview of the local market in the region, but note that most markets are only open in the morning (from 8 to 12.30). As usual, take good care of your valuables! The following local vegetables are a must to try out in the kitchen:

Melons from Cavaillon, known worldwide; from May.
Asparagus from the area; from April to May.
Pumpkin, many varieties; from September.

All other local vegetables during the spring, summer and fall.

Most of these cities are in themselves worth a visit. Some are small medieval villages with a great location, for example: Bonnieux, Gordes, Roussillon, Lourmarin and Oppede-le-Vieux. Aix-en-Provence, the old capital of Provence, is a wonderful old city with the main street Cours Mirabeau, many beautiful fountains, the Granet Museum and a number of great boutiques and shops and over 150 small and large restaurants, all located in the small area of "the old town".

Shops in Cucuron
There are two bakeries (boulangerie);  one in the main street next to the town hall and the other right oposite SPAR supermarket. Besides good cakes, baguettes and croissants, they have a simple whole wheat bread which they call "Nordik". They also have a good selection of pies and pizzas for picnic or lunch.  There is now actually a third bakery opened, also on the main street, where the fountain is. But this bakery is rather special, open only Mondays, Wednesdays and Fridays from 17.00 to 19.30. But you might have to order your bread in advance! Be there at 17.00 and you will be sure to get a good selection of the village's best bread (but no baguettes). It's called "Fournil des Touselles" and the telephone number is 04 9077 8033.

There is a butcher (boucherie) just off the main street, just walk down the small lane behind the Town Hall. Besides the delicate cuts of meat, they have good pates, hams, sausages and a different dish each day. 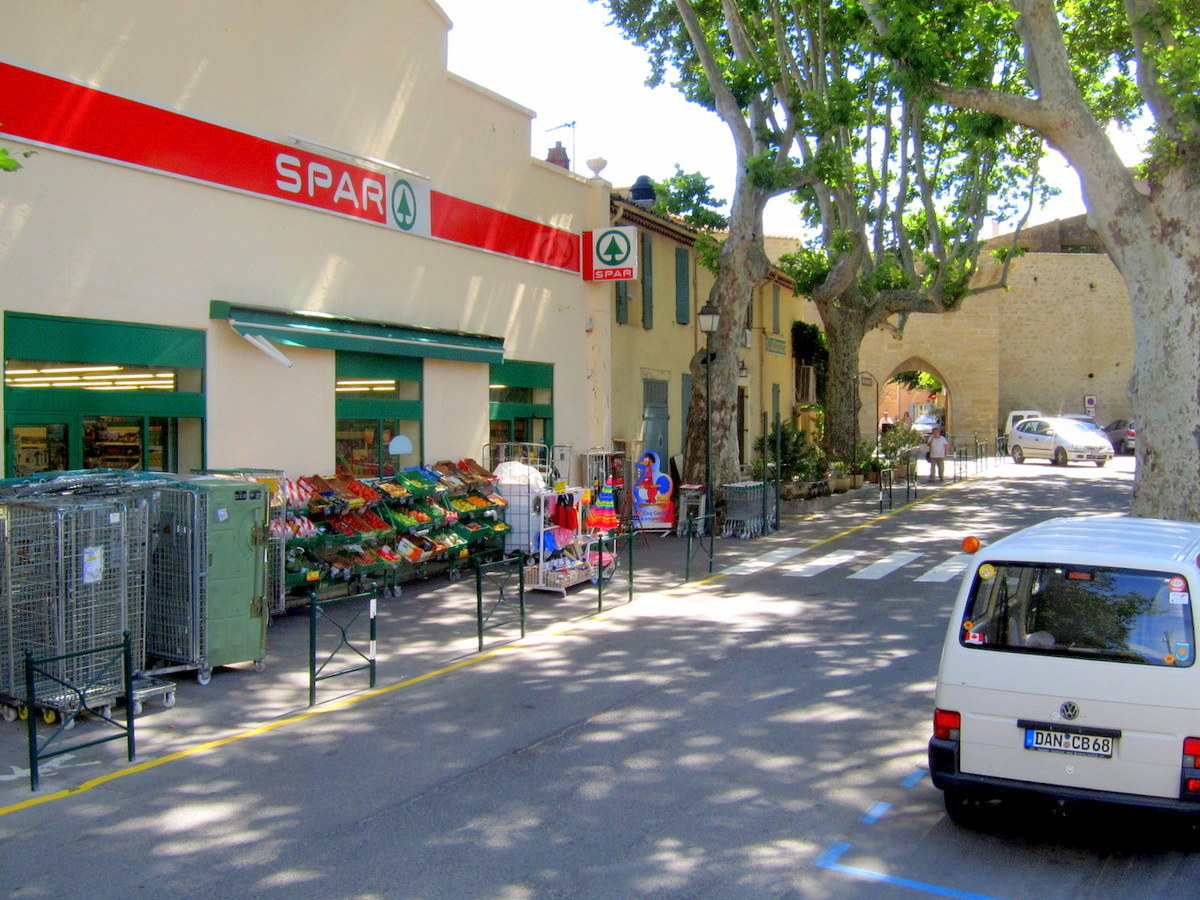 The old SPAR store closed its doors in the summer of 2009, but re-opened in the old premises of the old petrol station, which means it has 3 times the surface area. Now SPAR has an amazing range of food, including cheese, bread, meat, wine, fruit and vegetables. There is also a fishmonger coming every Thursday morning at the Etang in addition to the usual fishmonger on the Tuesday market (market day in Cucuron).

For buying wines, in addition to SPAR, there are two wine shop. One on Boulevard du Nord with wines from a local producer. The other wine store is the local Wine Cooperative's own store located opposite the library. The local wine cooperatives of Lauris, Lourmarin, Cadenet and Cucuron has recently merged and they make now all their wines in the new production facilities in Cucuron (2012). The shop has a large selection of local wines, all produced on the premises.

Remember that almost all local shops close for lunch (approx. 12.30 to 15.30) and will remain open until approx. 19.30. The big supermarkets in Pertuis, however, do not close for lunch, and they are open on Mondays, which is the day most shops in Cucuron and Pertuis is closed all day.

Supermarkets/Hypermarkets
Prices are well below the corresponding prices at markets and small local shops. Closest is the HyperU Hypermarket, at the entrance to Pertuis from Cucuron. On the other side of the Pertuis (the exit towards Aix-en-Provence) is a large concentration of shops along four roundabouts, including the large Carrefour Market Hypermarket for food and wine (the only competitor to HyperU). The best Hypermarket for food lovers lies just outside Aix, namely Carrefour at the large "Centre Commerciale" (La Pioline) at Les Milles. (30 minutes drive - take the motorway south towards Marseille, but take off quite quickly at Aix to "Les Milles.")

SHOPPING
Although you can buy a lot on local markets, there are so many good shops in the area.
Along the entrance to Pertuis from the south you will find a variety of shops of all sorts, including a Carrefour Market Hypermarket, a good hardware (Bricolage) and Intersport.

A little further away are some huge shopping malls, large areas with all sorts of shops. The three largest are:

Plan de Campagne, a little south of Aix towards Marseille; a huge area of shops (40 min.)

Vitrolles, quite close to the airport (45 min., IKEA and Carrefour can be found there)

La Pioline at Les Milles, near the Aix (30 min; Carrefoure is here.)

Aix-en-Provence has a rather unique Old Town (the area within the ring road). Make sure you park the car in a Parking along this ring road or in one of the Park & Bus at the entrance to the city. Don't drive into the Old Town as this is almost impossible, even for locals. The Old Town contains almost everything of interest in Aix-en-Provence. Not only approximately 150 restaurants, but also many of the famous fashion stores from Paris is here in smaller versions.

WINE
Wine can be bought in many places and at many prices. The major supermarkets have a good selection of French wines (best: HuperU and Carrfour), but I find it more satisfying to buy wine directly at the vineyard, where you also can taste it. We have several outlets at vineyards near Cucuron:

The Wine Cooperative's shop in Cucuron: Large shop in the village, just below Etang with good taste opportunities.
My favourite local wine (low end price/quality wise), I find in the neighbouring village of Cabrieres d'Aigues. Here the Domaine des Vaudois has a small shop with tasting facilities. The red and white are equally good at around 6 Euros per bottle.

Domaine les Vadon, just east of Cucuron. Good wine (Cuvee La Melchiorte). (15 minutes to walk.)
Chateau Turcan, Ansuios, on the road to Pertuis, with a private wine museum. A bit variable, but try their red wine.
Chateaux Val Joanis, on the main road between Villelaure and Pertuis, with a nice garden for visitors and a large general shop, and often art exhibitions. They are very good at marketing.
Chateaux La Verrerie, maybe Luberon's best wine, but hardly worth the price. On the road between Lauris and Merindol (30 min. driving).

In general, one could say that the local wine has become somewhat expensive for the quality due to tourism, but for red wine, I think you still find good buys.

There are not many shops dedicated only to wines and spirits. In Aix-en-Provence, you have two shops (Bacchus, 27 Rue d `Italie and Cave du Felibriges, 8 Anciano Carriero the Fabre), but the best wine shop is located in Apt (La Cave du Septi, Place du Septi) and here is the web side: www.vcommevin.fr

Wine at restaurants is starting to get expensive. Fewer and fewer restaurants offer local wines in carafe and they charge 3 times the shop price for a bottle of wine. Several restaurants in Cucuron however, serve local wines on caraf.  But is is worth trying out local wines in bottles, and later drive out to the vineyard to buy more (rarely more than 20 minutes drive).


Rhone Valley wines
Luberon wines (own AOC) is considered a Rhone-satellite because it has the same grape composition as south-Rhone and the general closeness to the area. The limit for AOC Cote de Rhone runs just north of the Luberon, so some vineyards on the northwestern side of the Luberon produce "true" Rhone wines.

On a nice day, try out the top wines of the southern Rhone. This will be a combination of Excursions 6 and 9 (see Excursions). Exit 22 on the A7 motorway going north towards Lyon is only an hour's drive from Cucuron. Gigondas is just east of exit 22 (Excursion 9) and is the younger brother of the more famous Chateauneuf-du-Pape (Excursion 6, just south of exit 22). Both villages have a lot of wine outlets with tasting facilities.